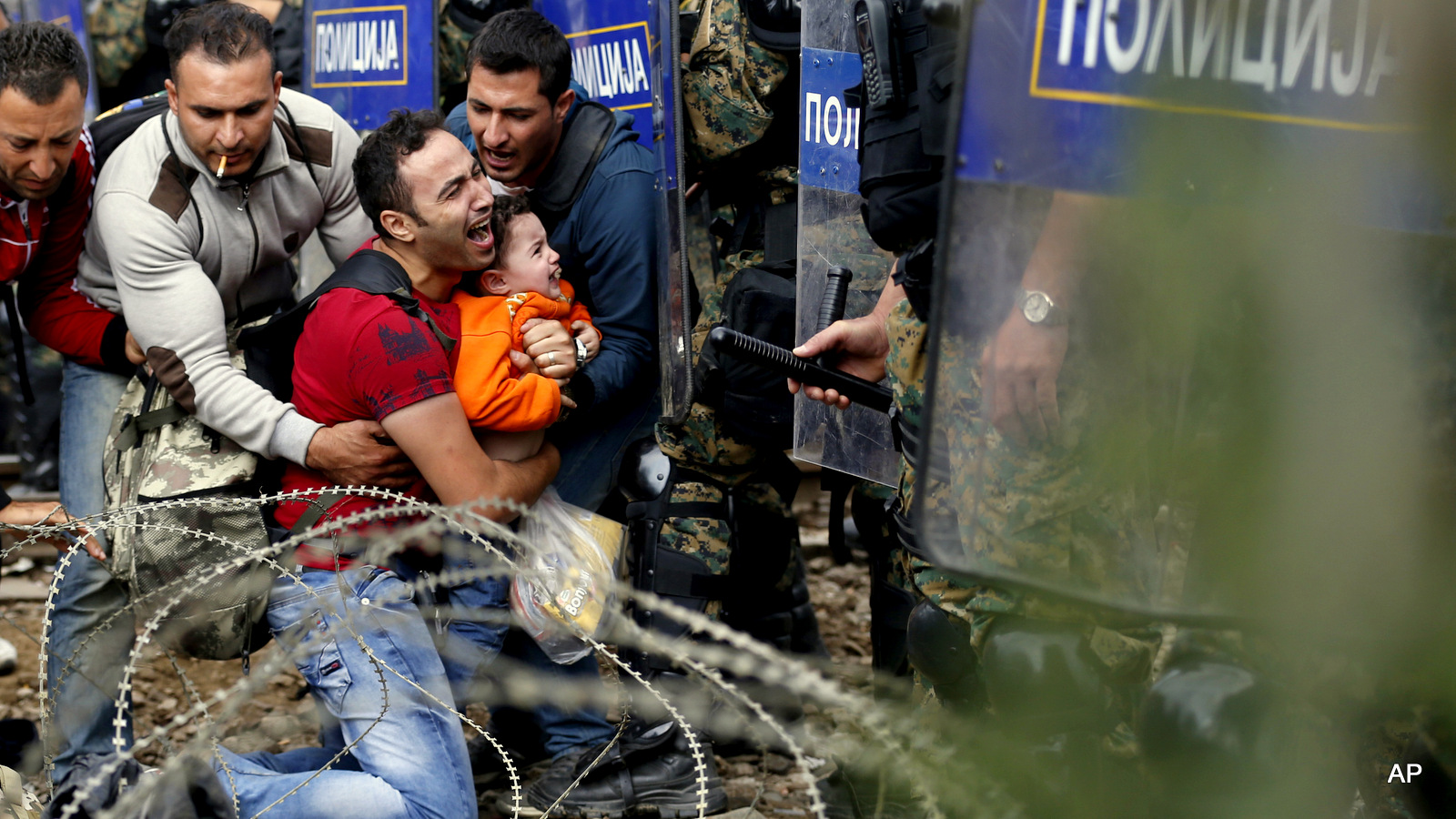 As Refugee Numbers Rise In Europe So Do Anti-Immigrant Tensions

German Chancellor Angela Merkel is meeting with French President Francois Hollande in Prague to try and reach a solution to the swathes of asylum seekers and refugees arriving in Europe.

Refugee’s assist a fellow Refugee holding a boy as they are stuck between Macedonian riot police officers and refugees during a clash near the border train station of Idomeni, northern Greece, as they wait to be allowed by the Macedonian police to cross the border from Greece to Macedonia, Friday, Aug. 21, 2015. Macedonian special police forces have fired stun grenades to disperse thousands of refugees stuck on a no-man’s land with Greece, a day after Macedonia declared a state of emergency on its borders to deal with a massive influx of refugees heading north to Europe.

A diplomatic source has told Italian newspaper, Corriere della sera, that both Merkel and Hollande are aware that “Europe is facing its biggest emergency in 50 years”, regarding the number of people needing to be re-settled in the EU.

The source suggests that decisions being made by EU leaders are not being reached quickly enough.

Also high on the agenda in Prague is the “further harmonization” of the EU’s asylum policy.

German minister Thomas de Maiziere recently told N24 that the current policy of check free borders is not fit for purpose without a clear asylum policy in place.

“Control-free borders cannot exist in the long term without a real European asylum policy”, he said.

A record number of asylum seekers and refugees are predicted to arrive in Germany this year. De Maiziere says the country will cope in the short term, “but long-term, 800,000 per year is too much for a country the size of Germany.”

And while the number of refugees arriving in Germany rises, so do community tensions.

German Interior Minister Slams ‘Disgraceful’ Violence Against Migrants
There have been violent clashes between neo-Nazis and security staff outside a refugee center in the eastern German town of Heidenau, near Dresden, leaving more than 30 police officers with injuries.

Hundreds of people protested outside the shelter, blocking access and hurling abuse at 250 refugees hoping to arrive there.

Police say the demonstrators, from far-right groups in Germany, threw stones, bottles and firecrackers, forcing the police to retaliate with tear gas and seal off the disused DIY shop built to house 600 refugees.

Germany has seen record numbers of attacks on asylum seekers’ homes this year, with some shelters subject to arson attacks. And in some instances, far-right groups have been encouraging people to sign up to a “no refugee camps in my neighborhood” campaign.

But polls suggest that 58 percent of Germans support the re-settlement of refugees and asylum seekers in Germany. Yet, still missing, is the support by other EU countries to do the same.

A proposal by the European Commission to implement a quota system for European countries to share the number of asylum seekers has so far been rejected by many countries, including the UK.